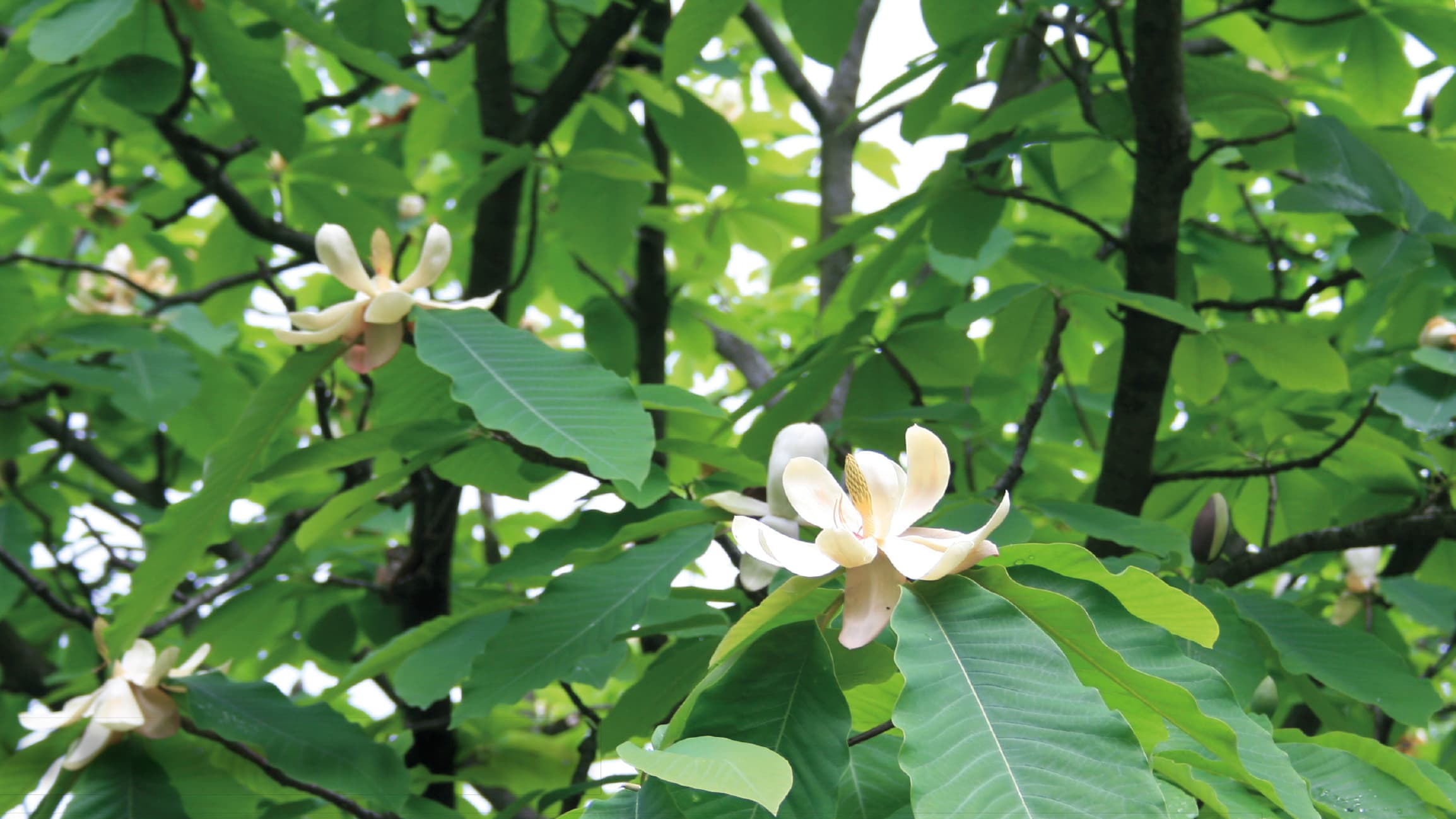 When we talk about magnolias, it is mainly the spring-flowering species and varieties that come to mind. However, there are magnolias that create fantastic impact with their leaves rather than their flowers. The Japanese bigleaf magnolia, Magnolia obovata, is such a species. Its huge leaves give any location a unique and exotic character.

The bigleaf magnolia originates from Japan and the Kuril Islands in eastern Russia. In Japan, it grows at higher elevations (up to 1500m above sea level) in its southern distribution, whilst in its northern range it grows at much lower altitudes (up to 500m above sea level). The species is associated with cool and moist habitats, such as river valleys, where it can develop into trees that reach 30m in height. In nature, it rarely occurs in large, uniform stands; more frequently, it is found as individual trees or small groups scattered within mixed deciduous forests.

The large white flowers (about 16cm wide), which bloom in late June and July, have a pleasant sweet scent that cascades into their surroundings on still evenings. If you can’t wait until the evening, just put your nose into the flower to enjoy its unique and beautiful smell. Flowers appear after the leaves have developed and it is not difficult to detect them because of their size and location: they rest on the large leaves, which can be up to 50cm long. You should be aware that flowering occurs relatively late in a bigleaf magnolia’s life – about 15–25 years from seed sowing – which means that if you want to enjoy the display shortly after planting, you will have to invest in larger, and thus older, trees.

The flowers are certainly beautiful and fragrant, but the leaves are perhaps the species’ greatest characteristic. During the summer, the fresh green leaves provide pleasant shade. In autumn, their upper side turns cinnamon brown, while the underside takes on light silver-brown colouration. When the leaves fall to the ground, they create a fine mixture of cinnamon and silvery brown. In botanic gardens, you can often see groups of children in the autumn equipped with their own giant bigleaf magnolia leaves: it seems to be impossible to pass these fallen leaves and not want to take them home!

Japanese bigleaf magnolia is relatively easy to establish. Avoid using bar-rooted or clumpgrown plants as the fleshy roots are very sensitive to overly brusque treatment. Thus, container-grown plants are recommended. To facilitate establishment in open and exposed places, they can be planted successfully with protective vegetation which can be removed as the magnolia develops. A well-established tree can have very strong growth in early maturity, with an annual shoot extension of over 1m being widely observed. This strong growth usually subsides after 40–50 years. As a youngster, it has a relatively narrow pyramidal to columnar growth habit with a usually continuous central leading trunk. As the tree matures, the crown splits into a number of coarse branches and becomes much wider.

The bigleaf magnolia requires good growing conditions. A rich and moisture-retaining soil is preferable – do not forget that the species originates from cool and moist forest environments in Japan and eastern Russia. So this is a tree for parks and gardens, because it requires soil conditions that can be difficult to offer in harsh inner-city environments. The species is also an interesting choice for mature park environments where you want an exciting addition in a fairly shady position, such as under a canopy of other light-transmitting tree species. Avoid placing it in overly windy and exposed sites.

Dr Henrik Sjöman is a Lecturer at the Swedish University of Agriculture Sciences and a Scientific Curator at Gothenburg Botanic Garden.

Dr Andrew Hirons is a Senior Lecturer in Arboriculture and Urban Forestry at University Centre Myerscough.

This article was taken from Issue 193 Summer 2021 of the ARB Magazine, which is available to view free to Arboricultural Association members by simply logging in to the website and viewing your profile area.