You are here > News > Emerald ash borer: a brief overview

With ash trees in the UK already under pressure from Chalara ash dieback (Hymenoscyphus fraxineus), a new threat emerging from North America and Asia could have devastating effects on our UK ash population.

Emerald ash borer (Agrilus planipennis Fairmaire (Coleoptera:Buprestidae)) is one of the most serious pests of ash (Fraxinus spp.) trees in North America, causing approximately $10 billion in economic damage and resulting in the widespread mortality of ash resources throughout the US. Emerald ash borer (EAB) is yet to arrive in the UK. However, importation of wood from areas where it is present increases the risk of introduction.

Emerald ash borer is indigenous to eastern Asia and is predominantly a pest of ash trees. Populations were first detected in the United States and Canada in 2002. Based on dendrochronology studies, EAB was likely first introduced in the early 1990s in Detroit, Michigan, believed to have been in ash wood used to secure crates on freight ships from Asia. It can easily infest both healthy and stressed ash trees in North America, where native ash species have not co-evolved with EAB. Within the beetle’s native range in China, species of Asian ash are usually resistant to EAB except during prolonged periods of environmental stress such as drought. 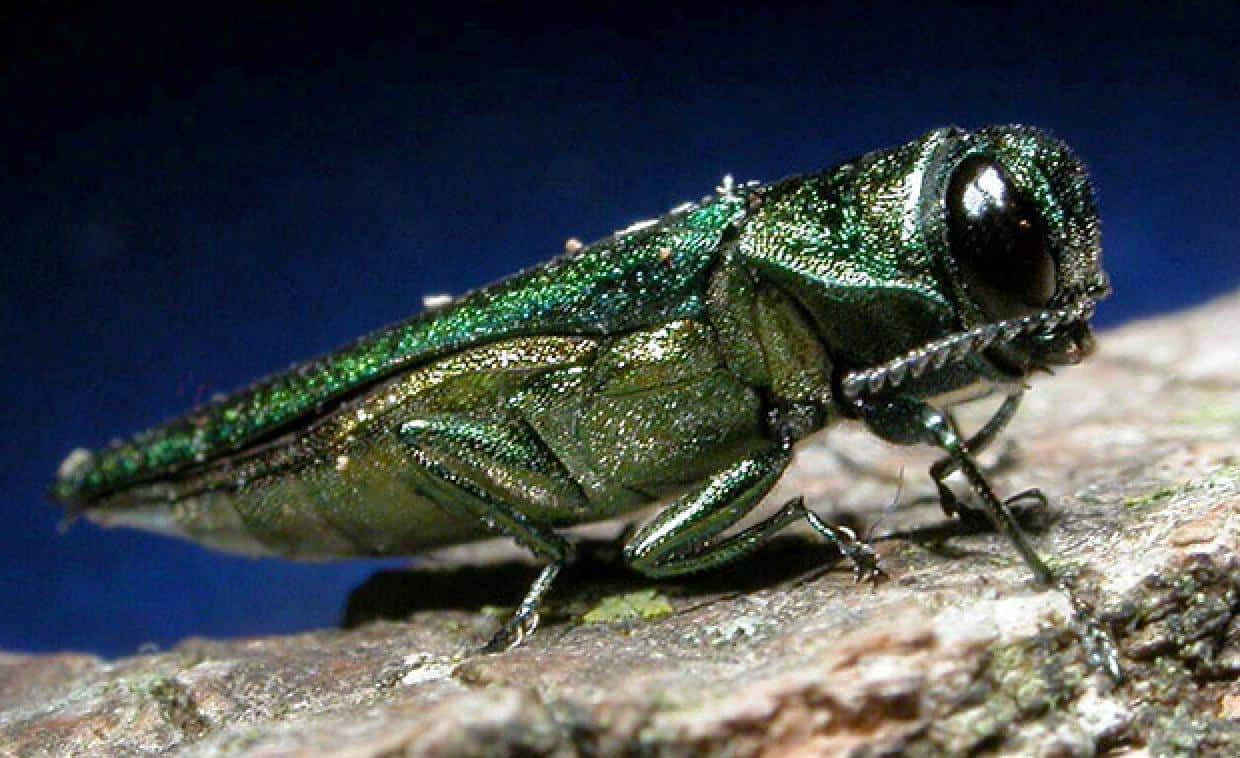 The life cycle of the beetle is primarily completed in one year but two years are often required, particularly in cooler climates or when eggs are laid late in the season. The adult flight season usually begins in May or June and peak flight occurs from June to July, ending in September. Emerald ash borer adults are most active on sunny days when temperatures exceed 25°C. During cooler or wet weather, adults will often rest in bark crevices or leaves. Adults consume foliage and live for up to several weeks under favourable conditions. To locate suitable hosts and potential mates, adults use olfactory and visual cues. Shades of purple and green are highly attractive to adults. Volatiles from ash bark and foliage have been shown to elicit positive responses in adults under laboratory conditions. Adults copulate on branches, foliage and the trunk of host plants. Oviposition occurs 5–10 days after adult emergence. Eggs are laid individually or in small clusters between layers of bark and in bark crevices along the trunk, major branches and sometimes exposed roots.

Under laboratory conditions, average emerald ash borer adult male longevity is 43 days; adult female longevity is seven to nine weeks with total fecundity averaging between 40–74 eggs per female, with a maximum of 307 eggs. Depending on temperature parameters, egg hatch occurs after 7–18 days. Neonate larvae chew through the surface of the egg that is in contact with the tree and tunnel directly though the outer bark to the cambial region where they feed on the inner bark (phloem) and outer sapwood, creating frass-filled galleries.

EAB has four larval instars; the head capsule and the sclerotized processes called the urogomphi located at the terminal end of the abdomen can be measured to distinguish the larval instars. For individuals completing their life cycle in one year, larvae overwinter as mature fourth instars. For individuals developing over two years, the first winter is usually spent as early instar larvae. Once a larva completes its feeding as a fourth instar, it constructs a pupal cell, usually in the outer sapwood of thin-barked branches of trees or in the outer bark of thick-barked trees. Before a pupal cell is created, fourth instar larvae bore a tunnel extending close to the surface of the outer bark that will be used as an exit hole for an emerging adult. In the pupal cell, a fourth instar larva folds itself into a J-shape before overwintering. In spring, larvae that overwintered in pupal cells develop into prepupae by gradually unfolding their body. Prepupae molt into exarate pupae (that is, pupae without a cocoon – they look like a very compressed, discoloured adult). Pupation occurs in late spring/early summer and can last for three to four weeks. After eclosion, the pharate (fully developed) adult remains in its pupal cell for approximately one week before it chews its way out of the tree by enlarging the exit tunnel, which is typically D-shaped and can be used as an indicator of infestation. 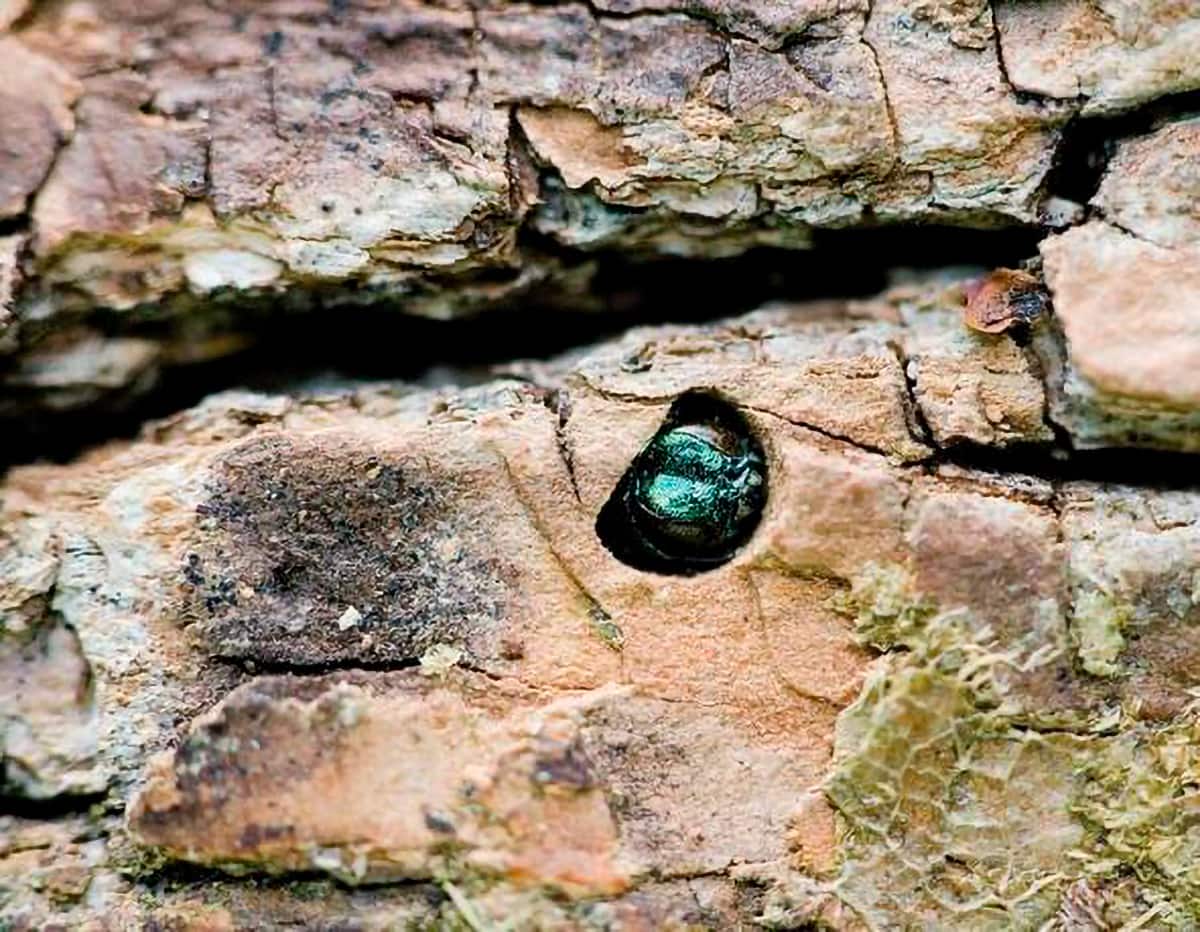 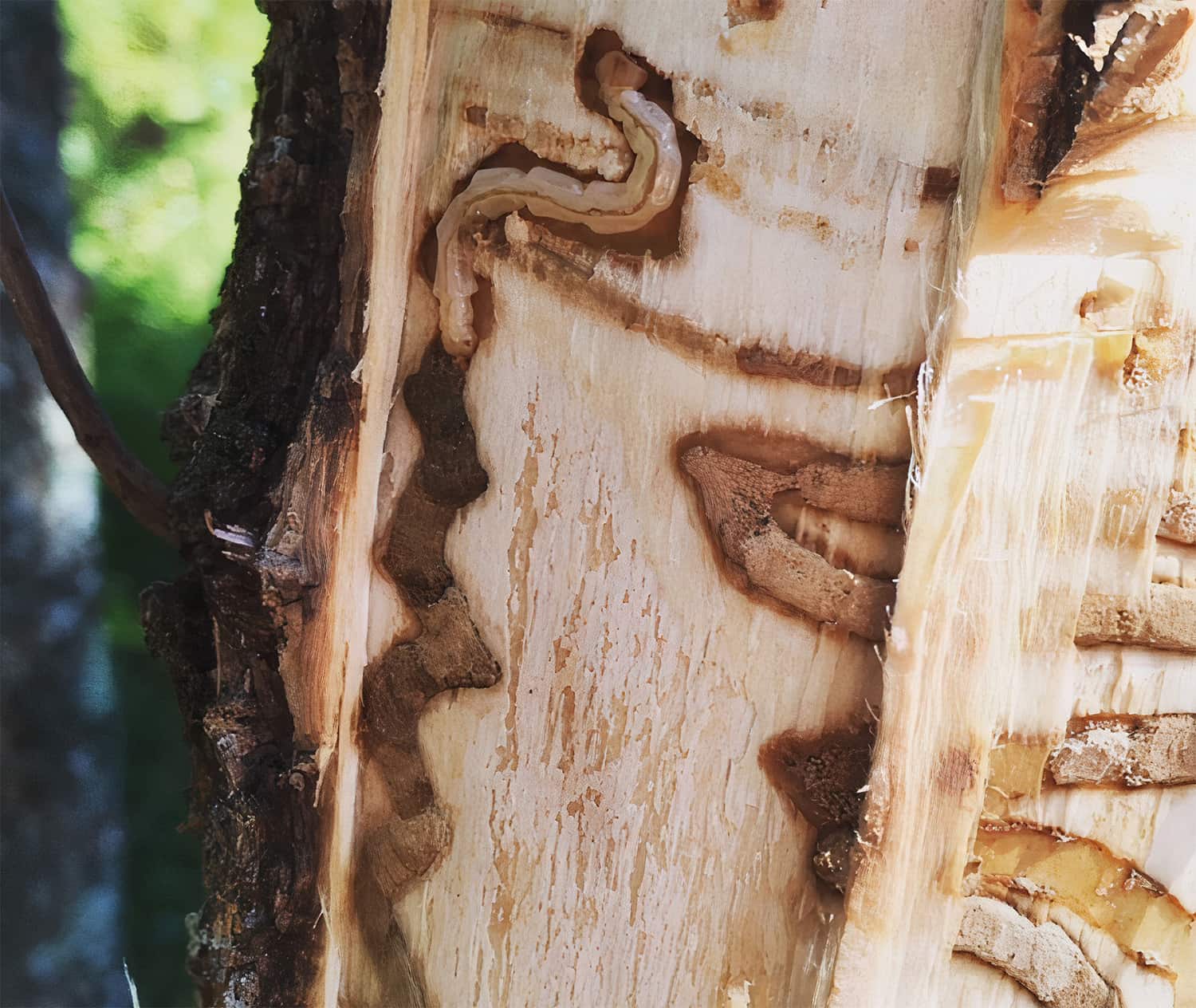 The impact of infestation

In North America there are 16 Fraxinus species. It is estimated that there are approximately 8.7 billion Fraxinus trees and saplings throughout the continental USA, all potentially susceptible to emerald ash borer. Over smaller spatial scales, Fraxinus spp. are essential components in forests and woodlands as a dominant or co-dominant species. In the UK, ash species were the second most commonly planted genus, and ash makes up nearly 15% of all UK broad-leaved woodland.

Trees often die after 1–3 years of successive infestation: mortality often begins in the crown branches, moving downward to the main trunk. Epicormic branches often develop along the lower trunk and are considered a sign that the tree is about to die. 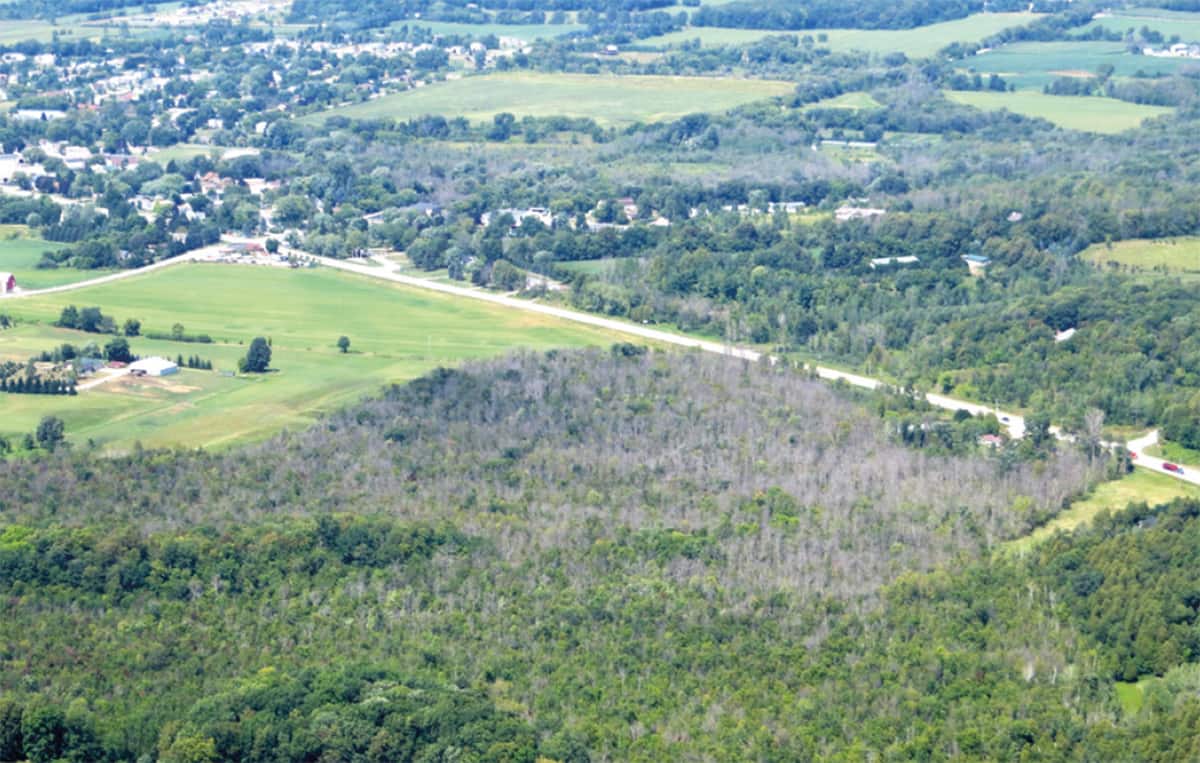 As Fraxinus species die, gaps in the forest canopy occur allowing light penetration further towards the forest understorey. Significant ecological impacts of the beetle will be determined by what plant associations establish post-invasion. In areas where EAB was first documented, green ash (Fraxinus pennsylvanica) has been replaced by spicebush (Lindera benzoin L.), pawpaw (Asimina trilobal Dunal) and prickly ash (Zanthoxylum americanum Mill). It is uncertain what post-invasion forests will look like: in many regions where EAB has impacted communities there is still regeneration of Fraxinus saplings and seed banks documented in the soil. The introduction of natural enemies and in some instances chemical treatment may reduce EAB density and allow regenerating ash to retain its ecological importance. Where significant forest structure changes occur as a result of EAB invasion, the biota, species interactions, hydrology, light regimen, nutrient cycling, vertebrate food value and other integral ecosystem characteristics will be altered. Structural changes may alter the suitability of the forest as a habitat for resident vertebrates and invertebrates. Canopy gaps, for instance, are shown to cause microclimate changes impacting ground beetle populations and encouraging invasive plant species, which would otherwise be limited by light availability.

If you think you have spotted signs of emerald ash borer anywhere in Great Britain, you must tell Forest Research immediately using the TreeAlert pest reporting tool: www.forestresearch.gov.uk/tools-and-resources/tree-alert/. Suspected sightings in Northern Ireland should be reported using TreeCheck: www.treecheck.net/ 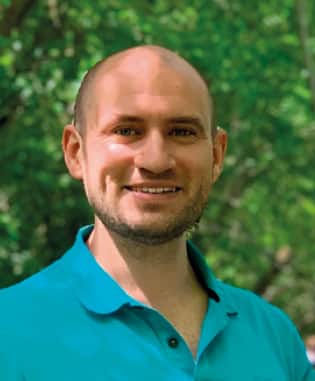 Sam Rivers currently works as a technical sales manager for ICL UK. Sam has a broad range of practical experience which includes working for a forest entomology lab in the US and as a senior horticulturalist at Cambridge University. He holds a National Diploma in horticulture, a BSc (hons) in Horticulture and an MSc in Entomology.

This article was taken form Issue 191 Winter 2020 of the ARB Magazine, which is available to view free to Arboricultural Association members by simply logging in to the website and viewing your profile area.